A member of a public organization for assistance to homeless animals in Krasnoyarsk (Siberia) invented a new service for people - "a cat for rent." 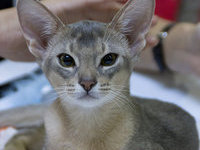 A message appeared on discussion boards of the city offering anyone to rent a cat. The cost of a single two-hour visit of the animal to the customer was estimated at 300 rubles ($10). The initiator of the new service Alyona Temerova explained that she was spending most of her earnings on transport.

Temerova said that such practice is stressful for her cats, of course. The woman's "cat park" has only two cats - Mashka and Klyopa. According to Temerova, communication with cats shows a positive effect on the human psyche. In addition, it is believed that purring cats help normalize human blood pressure.

The woman believes that the service will be of interest to those who can not keep a cat at home for various reasons. Some others can rent a cat to see if they can keep a cat of their own as their pet. Using the service, they can check whether they are prepared for the appearance of a new tenant in the apartment.

A similar service was launched in St. Petersburg in 2011. A local organization that helps homeless animals, offered people to rent a cat for free and keep the animal afterwards, if they liked it.