The fans of Arsenal midfielder Andrei Arshavin discuss the big news. Rumor has it that the family of the football star is falling apart. Reportedly, Arshavin is often seen at London night clubs with a top model, whose name is concealed carefully. 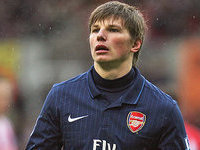 The first rumors of a split in the family of the football player appeared six months ago, the Komsomolskaya Pravda newspaper said. They say that the wife of Andrei Arshavin, Julia, suspected the existence of another woman in the life of the captain of the Russian national team, but chose not to believe the rumors and gossip.

The couple has found a compromise for the sake of the children: they still communicate, Neva24 says. When reporters phoned Julia in London to comment on Arshavin leaving the family, she burst into tears and said she was not yet ready to discuss that.