Google Russia has unveiled the name of a young doodle artist, who created the best company logo. The winner's doodle will adorn the main page of the Russian-page of the search engine on December 10, according to Popsop.ru. 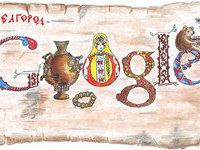 In September of this year, Google offered Russian students to draw a "doodle" - a special logo that appears on the main page of the Internet giant on certain occasions, Sostav.ru wrote. The winner of the national competition "Doodle for Google" became eight-year-old Pyotr Alekseyev from the city of Belgorod.

School children aged from 6 to 17 years were asked to design a "doodle" on the theme "My City. My Country." More than 5,000 children from 70 cities of Russia took part in the contest. The contest was held in three stages. During the first one, the jury selected 30 best works. The second phase was held in the form of online voting. During the third one, professional doodle artists picked the best works in various age categories.

As a reward, School No. 1 in Belgorod, where the boy, a second-grader, studies, will receive a computer room. The winner - the boy and his parents - will travel to Google headquarters in San Francisco, the Komsomolskaya Pravda newspaper said.

The doodles, or unusual versions of the official logo, were invented by company founders Sergey Brin and Larry Page in 1998. The idea occurred to them incidentally, when they finished the drawing of a wooden man behind the second "O" in the logo. By doing so, Brin and Page informed everyone that they had left for Burning Man Festival in the Nevada Desert.

Since 2000, doodles became a tradition - Google opened the position of Chief Specialist on doodles. Twelve years later, the team of doodlers has grown into a large department of illustrators who have by far designed over 1,000 doodles for different occasions.