17:57
German PzH 2000 howitzers captured by Russian military in Ukraine
17:46
Russian ice hockey player accused of dodging army service as he wants to sign up NHL
17:13
Czech general tells bad news to Zelensky
17:03
Protests in Uzbekistan: Authorities backpedal as 18 people killed
16:38
Zelensky's adviser says the surrender of Lysichansk is Ukraine's successful operation
16:05
Anonymous insider explains why Russia tolerates shelling of its cities by Ukraine
15:59
Mysl Polska: Ukrainian refugees see Poland as a cash cow
15:52
Kyiv responds to the neutralization of 40 Nazis with a staged video
15:22
The West gets caught in the trap of "Catch-22"

Russian scientist who spied for China to be released on parole

Valentin Danilov, a thermal physicist from Russia's Krasnoyarsk, who was convicted eight years ago of spying for China, will be released on parole. He will be able to leave prison in ten days. 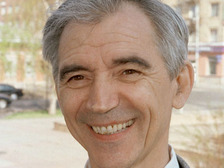 The decision to release the scientist on parole was made at a meeting of a court of Krasnoyarsk, NIA Krasnoyarsk reports. The term that Danilov will not serve thus makes up is a little more than three years. The physicist will be released in ten days, during which the court's decision can be appealed. The scientist took part in the court session through a videoconference.

"We do not think that the decision will be appealed, as the prosecutor has supported the petition," said court spokesman Maria Fomushina. She noted that the decision to hold the meeting was made today after a message was received from the local Central Directorate for Internal Affairs saying that Danilov had been transferred from hospital to prison.

The criminal case against the former head of the Krasnoyarsk Thermophysical Center, Professor Valentin Danilov, was initiated in May 2000, KM.Ru reports. He was charged with state treason and the delivery of classified information to China.

In February 2001, Danilov was sent to a detention center, from which he was released on bail on September 27, 2002. In December 2003, the jury acquitted the scientist, but the Supreme Court declared the decision illegal. The scientist was taken into custody again on November 10, 2004. Two weeks later, the Krasnoyarsk Regional Court sentenced the physicist to 14 years in prison on charges of treason and fraud. Subsequently, the court sentence could be shortened for one year, said Pravo.ru.