An 18-year-old graduate of a ballet school was seriously injured as a result of a terrible accident. A commuter train caught the woman and dragged her along the platform. Then, the woman fell under the wheels of the train and received serious injuries, Life News reports. 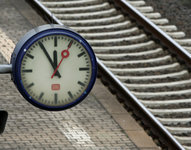 According to her friends, the young student of stage management department, Daria Sukhanova, was going from Serpukhov to Moscow. The tragedy occurred, when she was going to her first day at work as a salesgirl in the "Children's World" department store. The girl was standing too close to the edge of the platform, and a moving train hit her with a side mirror. As a result, the locomotive carriage dragged the woman for several meters, and then the young dancer fell into the gap between the platform and the train.

The girl was taken to the intensive care unit of Serpukhov City Hospital with multiple fractures. She was unconscious. "She has a fracture of the cranial vault, broken jaw, legs and arms. The woman can not speak yet; she receives food through special tubes," Daria's friend said.

Meanwhile, the teachers of the ballet school, in which Daria was working with children, still can not believe what happened. "She is a very positive girl, she is so hardworking and responsible. She did not perform solo: we have a company, and we are involved in all local city activities," a teacher said.

The dancer still stays in the intensive care unit. Her condition is moderately stable. For full recovery, the woman will have to have a number of operations, including plastic surgery.