Couple has public sex in St. Petersburg in other people's presence

The police of St. Petersburg has started investigation into the publication of an obscene video on the Russian Internet. The video showed a young couple having sex on the city's iconic street Nevsky Prospekt, Fontanka.ru said. 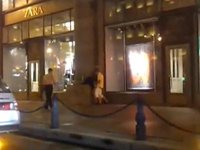 The website reported Tuesday that the video (click to watch) of the act of love on Nevsky Prospekt, which received nearly 200,000 views in two days, was removed from YouTube, the man who filmed the video wrote on his page.

According to Alexander Chuyev, a resident of St. Petersburg who posted the video on the net, the clip was banned because of its headline, "Liberals on Nevsky." The YouTube administration considered it was political propaganda. However, it is obvious that the video was removed from the portal because of its explicit content and foul language.

"They now promote the Western liberal lifestyle in russia. Example, in Finland they want to legalize incest. I decided to mock that. Sex on Nevsky - this is the behavior of liberal youth in the hypertrophic degree," Chuyev  wrote.

The author of the video claimed that the local police showed absolutely no interest in the incident in spite of the fact that surveillance cameras literally inundate the whole street. According to him, he was expecting the incident would end with a scandal with police officers. "But the most interesting thing is that they never arrived! In the video we can see that pedestrians do not pay attention to the couple on the sidewalk; a sweeper drove by twice," he said.

Peter TV information portal said that everything was happening on the main street of the city. The act may entail a criminal punishment for hooliganism. The Komsomolskaya Pravda newspaper wrote that the eyewitnesses of the incident did not file any complaints against the couple. The woman in the video did not report a rape either.

The sex video on Nevsky Prospekt was shot at night of August 16-17, but it appeared on the Internet in ten days only. According to Chuyev, he was traveling in a taxi to meet a friend of his at five o'clock in the morning, , when the taxi driver paid attention to the couple copulating near Building No.21 on Nevsky Prospekt, opposite the Kazan Cathedral. Chuyev started filing the couple on his cell phone. In a few days he forgot about it, but eventually uploaded the video on YouTube after he received a text message from the taxi driver, who reminded him of the in incident.

The video shows a sexual act between a man and a woman, who pay no attention to other cars that pull over to watch them. The author of the video was watching the couple for nearly 20 minutes. According to eyewitnesses, the couple became reason for a traffic jam on the street. According to Chuyev and other eyewitnesses, the woman in the video was drunk. After two young men approached the couple, the woman left. Apparently, she had nothing against sex in public.