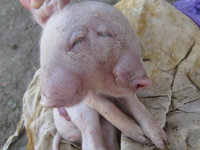 The mutant animal came to light in one of the farms of the Bryansk region. The piglet had two heads, two snouts and two pairs of eyes. Other piglets in the brood had no deformities.

Officials with the regional Department of Veterinary Medicine said that two-headed pigs appear in other countries as well. This is not an unusual phenomenon anymore. Moreover, such animals can live and grow. However, the two-headed piglet that was born in the Bryansk region died a few days after birth, Bryansk.ru said. As for his brothers and sisters, they are just fine.

Modern science does not have the answer to the causes of such mutations. It was only established that they occur during late stages of pregnancy.