135 people jump off railroad bridge at once in Russia

A world record in rope jumping was set in the city of Tver, Central Russia, on July 30th. During the celebration of the city day, 135 people from Russia and the CIS jumped off a railroad bridge at one time, all together, Tver News reports. 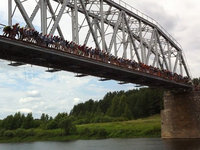 According to the website of the Moscow fans of extreme jumping, Mad Squirrels, the first festival gathered only 20 enthusiasts in April 2008. The number of participants increased to 54 in February 2009.

Sixty-six people gathered on the same bridge in Tver in July 2010. The stunt went well - no one was injured. Last year, Moscow rope jumping team Exit set an absolute record - 100 people jumped off the bridge simultaneously.

Since there is no official statistics to register the bridge jumps, the most recent jump of 135 people can be considered a record one in both Russia and in the whole world.

Rope jumping is an extreme and highly dangerous sport in which a person jumps off a high-rise object (bridges, buildings, chimneys, antennae, rocks, etc) with the help of climbing ropes and equipment. There are several types of such jumps: with free fall and without free fall (pendulum). Some jumpers perform acrobatic stunts as they jump.

The sport was started by US-based climber Dan Osman. To overcome the fear of incidental fall, he started jumping off steep mountainsides.