Mr. Trololo dies from stroke at 78

Eduard Khil, widely known as Mr. Trololo, died in St. Petersburg at age 78 on Monday night, June 4th. The singer was hospitalized with a stroke on April 8th. He fell into a coma at the end of May. Russia's Healthcare Minister Veronika Skvortsova took Khil's treatment under her personal control. 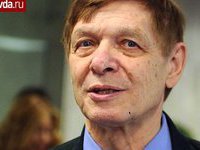 Vitally important areas of the brain were deteriorated in the very beginning of the disease. This resulted in a malfunction of the whole organism. The specialists of the hospital managed to stabilize the patient's condition and prepared him for the next stage of the treatment. The also added that it could be possible to save the singer's life, although they could not give any guarantees.

Eduard Khil was born on September 4th, 1934 in Smolensk, Russia. He was the first artist to sing such songs as Woodcutters and Moon Stone by Arkady Ostrovsky, and Song about Friend, Blue Cities, And People Go To the Sea by Andrey Petrov. Other popular songs performed by Khil included From What the Homeland Begins?, How the Steamers Are Seen Off, Winter (Зима), Birch Sap, Alder Catkin, We Need Only the Victory, and many others.

His "rebirth" took place two years ago, when his song without words titled "I am happy that I finally come back home" became a huge hit on YouTube. Khil performed this song for the first time 40 years ago. The video received millions of views and left hundreds of positive comments. The song became a huge hit in the United States and turned the singer into "Mr. Trololo."