Whitney Houston, the legendary singer best-known for her immortal hit "I Will Always Love You" died at age 48. The world-famous singer was found dead in Beverley Hilton Hotel in Los Angeles. The cause of death has not been determined yet. However, the police exclude the version of homicide. 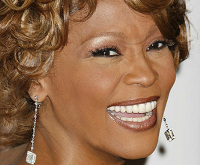 The bodyguard of the singer found Houston's body in the hotel room. She was unconscious. The ER vehicle arrived at the scene within several minutes. Paramedics took life-saving efforts, although to no avail. Whitney Houston was pronounced dead on Saturday at 3:55 p.m.

Relatives and friends have already identified the body. According to TMZ, Whitney was on the phone with her mother shortly before she died. The singer appeared to be just fine.

The singer passed away hours before her performance in a music marathon at Beverley Hilton Hotel. The ceremony precedes Grammy Awards. Houston is a six-time Grammy winner.

She won her first Grammy Award for "Saving All My Love For You." Houston got her last award in 1999 for "It's Not Right But It's Okay."

Houston has recently finished working on the film "Sparkle" - a remake of the 1976 motion picture. She played the main part in the film and recorded the soundtrack. The film was supposed to be released in August 2012.

Houston was the most awarded female act of all time, according to Guinness World Records. Her list of awards includes two Emmy Awards, six Grammy Awards, 30 Billboard Music Awards, 22 American Music Awards, among a total of 415 career awards as of 2010. Houston was also one of the world's best-selling music artists, having sold over 170 million albums, singles and videos worldwide.

Inspired by prominent soul singers in her family, including her mother Cissy Houston, cousins Dionne Warwickand Dee Dee Warwick, and her godmother Aretha Franklin, Houston began singing with New Jersey church's junior gospel choir at age 11. After she began performing alongside her mother in night clubs in the New York City area, she was discovered by Arista Records label head Clive Davis. Houston released seven studio albums and three movie soundtrack albums, all of which have diamond, multi-platinum, platinum or gold certification.

Houston was the only artist to chart seven consecutive No. 1 Billboard Hot 100 hits ("Saving All My Love for You", "How Will I Know", "Greatest Love of All", "I Wanna Dance with Somebody (Who Loves Me)", "Didn't We Almost Have It All", "So Emotional" and "Where Do Broken Hearts Go").