The zoo of the Russian city of Karaganda rescues its monkeys from cold with the help of hot wine. 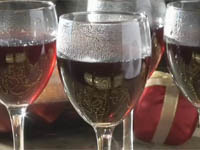 "Monkeys get warm with the help of the wine drink. We give each ape some 50 grams. We take a bottle of "Kagor" red wine, add some apples, lemon, sugar and simmer for a while," Svetlana Pilyuk, a spokeswoman for the zoo said, Rosbalt reports.

According to Pilyuk, the apes enjoy the hot wine drink a lot. "This is normal international practice. During the cold time of the year, when we plan to take the animals to a different zoo, or when we have to transfer them from summer to winter enclosures, employees give them something sedative. Most likely, they give them the "Kagor" red wine, which is widely used in Orthodox churches. This is normal practice in all zoos of the world. In their natural habitats, apes also consume alcohol-containing plants that can relax their nervous system," the scientist said.

The hot red wine drink also improves the immune system of the animals.

Current temperatures in the city of Karaganda have gone extreme. Nighttime temperatures drop to 33-38 degrees below zero Centigrade. The zoo of Karaganda was established in the middle of the 1930s. There are over 1,000 animals living there, including lemurs, lories, capuchin monkeys, marmosets and apes.