Ugg boots banned in US school

Ugg boots were banned for wearing at one of US schools. The reason why is simple: students attempt to hide their cell phones and other gadgets in flat-sole soft boots. 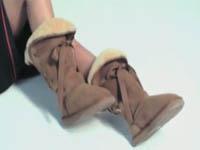 The unusual rules were introduced at Potsdam Middle School, Pennsylvania, The Daily Mail reports. Using cellular communication during classes is banned at the educational institution. However, many students would very often break the rules to use their phones to communicate on social networks. Many of them would carry their gadgets in the Ugg boots.

The school administration banned Ugg boots in an attempt to improve the situation. Students and their parents are not happy with the new rules. Many of them express their criticism on the Internet. Some of them wrote that female students may very often hide cell phones in their bras. Does that mean that bras will have to be banned next?