World's largest Holy Book of Islam on display in Kazan 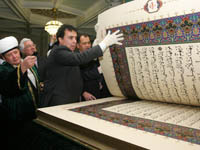 The world's largest Quran, the Holy book for all Muslims, has arrived in Kazan. The huge book sized 1.5x2 meters weighs 800 kilos. The book has 632 pages, made from Scottish paper. The cover of the book is encrusted with semiprecious stones, malachite, fianites, jasper, as well as gold and silver leafs.

The book has already made a Guinness Book entry as the largest edition of the holy Muslim book. Before the summer of 2012, the world's largest Quran will be kept at Kazan's Qol-Sharif Mosque. Afterwards, the book will be taken to Bulgary for celebrations of the 1,122 years of Islam in Russia's Povolzhye region.

In Bulgary, the world's largest Quran will stay forever. The book will be stored in a special sarcophagus. The building for the book is about to be finished - it will be a museum of only one exhibit.

The book was made and printed in Italy on the order from Vozrozhdenie (Revival) Republican Foundation of Tatarstan, Tatar-Inform news agency said.

The book became possible to make owing to 1.5 million euros of donations.