Darth Vader comes to ask for land in Ukraine's Odessa 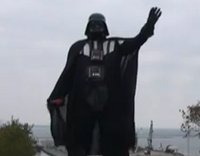 Darth Vader of Star Wars has recently paid a visit to the municipal administration of Odessa, Ukraine. A man dressed in the costume of the world-famous character came to ask for land.

The man said that he had heard that the Municipal Council of Odessa was giving away plots of land, so he came to ask one for himself. Darth Vader presented a Ukrainian passport and a filled out application.

"I am Darth Vader, the right hand of Emperor Palpatine. I've learned that the municipal administration of Odessa was giving away land, so I came to ask for my plot. I know that the deputies of the council, the executive committee and Mayor Kostuev are on the dark side of Power, so they will help me," the visitor stated.

Darth Vader's documents were checked and the movie character was taken to the office, where his application was accepted.

According to the Land Code of Ukraine, the Ukrainian citizens indeed have a right to receive land from the state. A plot of land can be used for farm business, for gardening, or for the construction of a garage and/or country house.

Darth Vader comes to ask for land in Ukraine's Odessa