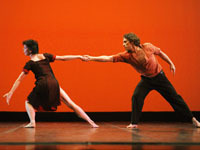 "The artists have written the applications, but they have not been signed yet," Mr. Filin said.

Ivan Vasiliev has been working in the troupe of the Bolshoi since 2006. Natalia Osipova has been dancing in Russia's widely recognized theater since 2004.

"We are going to talk to them and try to convince them to stay. We can offer them a flexible schedule," Sergei Filin said, BFM.ru website reports.

The reason for which the two lead ballet dancers of the theater want to leave has not been exposed.

The Bolshoi Theater opened its doors after six years of restoration works. The reconstruction cost over 20 billion rubles. The territory of the theater has increased nearly twice - to 72,000 square meters (including the underground facilities). The administration of the theater says that the Bolshoi now has the interiors of the 19th century. The Emperor's Lobby, for example, is decorated with chandeliers, tapestries, Jacquards and gold-coated stucco moldings.

A special gala show was held on the opening day of October 28. The true return of the theater took place on November 2 with Russlan and Ludmilla opera. The spectacle continued for 4 hours 55 minutes. The opera receive mixed reactions from spectators, though. When curtains finally fell, some screamed "Bravo!" while others screamed "Shame!"