Hitler's paintings to be auctioned to cover family debts in Sweden 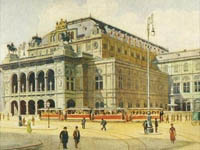 Swedish officers of justice are going to sell the paintings thought to have been painted by Adolf Hitler.

The money received from the auction will be used to cover the debts of a local family.  The name of the debtor has not been unveiled. In case the seven paintings are proved genuine, they may fetch $15,000 each.

The Jewish community of Stockholm expressed its protests in connection with the auction. "It is highly inappropriate that anyone should be able to earn money by selling such objects," David Lazar, a spokesman for the community said.

Officials with the Swedish officials said that they could not take ethical issues into consideration in regulating the disputes connected with large debts.

Hitler failed to be accepted by the Vienna Academy of Art. The German leader, in his early life, earned money by drawing advertisements and postcards.

Thirteen of Hitler's paintings were auctioned in Britain in April 2011. The auctioneers earned over 95,000 pounds. The most expensive, sold for 10,000 pounds, was a self-portrait, Zeenews reports.