Two US women arrested in Moscow for undressing in public

Two PETA activists from the United States were arrested in Moscow for their attempt to undress in front of the International Trade Center, officials with the law-enforcement agencies of the Russian capital said. 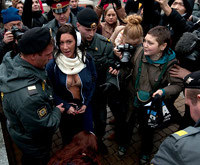 "Two US female citizens were arrested for holding an unauthorized picket in which they removed their clothes in public," officials said.

A message from PETA said that the Moscow event was held under the title "Wear Your Own Skin". Two US activists of the movement for the ethical treatment of animals stripped down to their bikinis in an attempt to attract people's attention to atrocities of the fashion industry. The women tried to urge the visitors of the International Trade Center not to purchase leather, fur and wool clothing and shoes, Interfax reports.

It was a brave action to hold indeed. It is cold in Moscow now: daytime temperatures reach only 5-7 degrees Centigrade above zero.