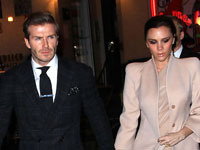 The Beckhams' decision to name their newborn daughter Harper Seven may have split public opinion yesterday, but one thing's for sure: her three big brothers think it's a wizard decision.

That's because Brooklyn, 11, Romeo, eight, and five-year-old Cruz are said to have been behind the unusual moniker.

Harper is the name of a character from Disney series Wizards Of Waverly Place, the boys' favourite TV show, Daily Mail informs.

The second part of the name, Seven, is a number that holds personal significance for the family. "She was born in the seventh month, in the seventh hour, weighing seven pounds" a source said.

And seven also corresponds to football star David's old shirt number for both Manchester United and England, according to hellomagazine.