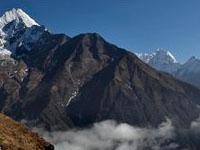 A 30-year-old Nepali guru, believed by his followers to be a divine being with supernatural powers, has created a record in the spiritual world by meditating for 27 hours - on Mt Everest, the highest peak in the world.

Bhakta Kumar Rai, born in an ethnic community in a remote village in Udaypur district in eastern Nepal, transformed himself into "Supreme Master Godangel" after founding a sect, the Heavenly Path, when he was only 18, according to .

Rai's followers, who are scattered over Nepal, India, Hong Kong, Britain and Malaysia, regard him as an angel sent by God to earth to propagate peace, eradicate poverty and encourage self-healing. He is also credited by disciples with having performed miracles from an early age.

The 30-year-old did create a miracle on Mt Everest, summiting the 8,848m peak Friday and staying up for an incredible 32 hours, out of which he spent 27 hours meditating for world peace.

"He reached the summit at 5.30 a.m. on Friday and stayed up meditating till 1 p.m. the next day," said Laxman Bhattarai, spokesperson at Nepal's tourism ministry, says.