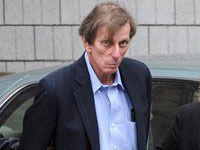 Joseph Brooks, an Oscar-winning composer who wrote 'You Light Up My Life' for the 1977 film of the same name, has been found dead at his New York apartment, apparently having taken his own life.

The 73-year-old, who was facing 82 counts of sex crimes including rape, was discovered on Sunday with his head in a plastic bag which had been attached to a tank of helium gas.

Brooks left a suicide note in his Upper East Side flat, in which he claimed that he would be found innocent of the charges against him, for which no trial date had yet been set, reports.

Brooks was awaiting trial on rape charged. In 2009, Brooks pleaded 'not guilty' to a variety of charges including rape. Police said he lured aspiring actresses to his apartment on the premise of an audition. He them had them drink drugged wine as part of an "acting exercise," and then sexually assaulted them.

Brooks' lawyer and Manhattan prosecutors were unavailable for comment Sunday.

Son, Nicholas Brooks is awaiting his own trial for the death of ex-girlfriend Sylvie Cachay, swimsuit designer. In December, he was found dead in the bathtub of her New York apartment. He pleaded 'not guilty,' reports.