Authorities bans smoking on beaches and in parks in New York 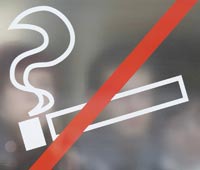 No smoking sings are already up in Central Park. Come Monday the city's sweeping ban kicks in at parks, beaches and pedestrian plazas, like in Times Square, reports.

New York City Mayor Mike Bloomberg pushed for the law that aims to drastically reduce, if not eliminate exposure to second hand smoke.

Following the lead of Los Angeles and Chicago, New York City is now the largest metropolitan area to attempt to cut down on the amount of second-hand smoke by enacting smoke-free laws for open areas.

It is the latest victory for advocates of smoke-free environments as more local and state governments explore the possibility of expanding their antismoking legislation.

According to the Centers for Disease Control and Prevention, 25 states have smoking bans for worksites, restaurants and bars and an additional five states ban smoking in at least two of those areas. The remaining states are dotted with local and municipal laws prohibiting people from lighting up at work, near hospitals, or at bars and restaurants, according to .