Fields of watermelons are bursting in China 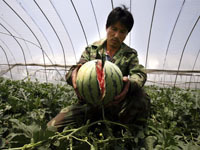 The use of a chemical that prompts plant growth may have contributed to overripe watermelons bursting in their fields in eastern China, the official Xinhua News Agency reported.

More than 700 mu (47 hectares or 115 acres) of melons in the city of Danyang in Jiangsu province were ruined when they burst open. The chemical forchlorfenuron may have caused some of the watermelons to burst, the news service reported, citing Wang Liangju, a professor at Nanjing Agricultural University. Heavy rainfall after a recent drought may have also contributed, according to the report.

"I have never seen this phenomenon," said Bob Morrissey, executive director of the U.S. National Watermelon Association in Lakeland, Florida. "Watermelons do not burst only from rainfall." The U.S. allows forchlorfenuron to be used for growth of grapes and kiwifruit and the chemical isn't classified in China as an illegal food additive, reports.

The incident has become a focus of a Chinese media drive to expose the lax farming practices, shortcuts and excessive use of fertiliser behind a rash of food safety scandals.

It follows discoveries of the heavy metal cadmium in rice, toxic melamine in milk, arsenic in soy sauce, bleach in mushrooms, and the detergent borax in pork, added to make it resemble beef.

Compared to such cases of dangerous contamination, Liu's transgression was minor, but it has gained notoriety after being picked up by the state broadcaster, CCTV. The broadcaster blamed the bursting of the fruit on the legal chemical forchlorfenuron, which stimulates cell separation but often leaves melons misshapen and turns the seeds white, reports.