First lady of France is expecting a baby 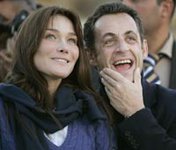 Carla Bruni, the first lady of France, is said to be expecting. German newspaper Bild quotes the father of Nicolas Sarkozy as confirming that Bruni is pregnant with her first child with France's president, reports "The Early Show" co-anchor Jeff Glor, according to .

"The two do not want to know the gender in advance, but I'm sure it will be a girl and as beautiful as Carla," Nicolas Sarkozy's father, Pal Sarkozy told a German newspaper, Bild.

There is also speculation that the first couple might be expecting twins, according to.

Sarkozy's office hasn't confirmed or denied the pregnancy, insisting that they don't comment on his private life, says.