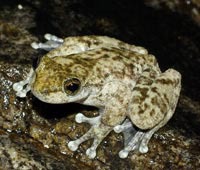 A resident of Germany Christian Tenhofera has been fined 1,5 thousand euros for killing a frog which belonged to his neighbor.

According Tenhofera, he shot the frog from a pneumatic gun, because it's annoying croaking kept him awake nights, according to .

The owner, who kept the dead frog in a refrigerator for several months as evidence to be presented at the court, claimed his pet "never croaked, probably because of some sort of genetic disorder."

The court in the town of Krefeld has decided to fine Tenhofer only after investigators found out that he acquired the gun illegally, reports.