John Demjanjuk sentenced to 5 years for aiding Nazis in killing 28,000 Jews during WWII 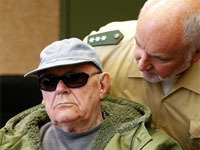 John Demjanjuk, a 91-year-old retired autoworker, was convicted and sentenced to five years in prison for aiding the Nazis in the murder of at least 28,000 Jews at the Sobibor death camp during World War II. He was released pending an appeal.

The Munich Regional Court found Demjanjuk guilty today after an almost 18-month trial. The former U.S. citizen was deported to Germany in 2009 and accused of being a guard who helped herd Jews to the gas chambers at the camp in German- occupied Poland during 1943. Demjanjuk has denied the claims and his lawyers said after the verdict that they will appeal, according to.

Mr. Demjanjuk's lawyer, Ulrich Busch, said he would continue to argue in appeal, as he has in cases throughout the past three decades, that the documents linking him to the camp are forged and that there is no proof that he worked at the camp or had any role in its activities.

His case may well be the final war-crimes trial of a Third Reich figure - while at least a dozen others remain alive and at large, the odds of any surviving through a trial are low. His ambiguity-filled verdict marks an anticlimactic end to the war-crimes odyssey, but one that may have lasting implications,reports.

14:23
Baltic and Polish MPs walk out when Russian speaker takes rostrum in Athens
13:36
Russia bans dozens of Samsung smartphones
21:36
Eric Zemmour, nationalist Covid dissident may take office as President of France
19:28
Russian boxer kills wild bear while on camping trip
17:03
Oleg Deripaska says everything he thinks about US establishment
15:53
Putin announces lockdown in Russia
14:29
Reasons behind bizarre death of four Russian tourists in Albania remain unclear
13:55
In Turkmenistan, students ordered to always carry books written by president
13:22
Russians say how much they need for comfortable life
21:31
Russia has all the power to cut the wings of the dove of peace - NATO
News from the Kremlin
Putin announces lockdown in Russia