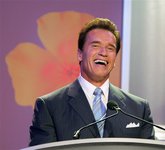 One of America's most unlikely and riveting couples - Arnold Schwarzenegger, the Austrian body builder and movie star who became a Republican governor, and Maria Shriver, the journalist and member of the Kennedy dynasty - have separated.

Mr. Schwarzenegger and Ms. Shriver said in a statement Monday night that they were "amicably separating." The separation came five months after Mr. Schwarzenegger finished his second term as governor of California and as people here were closely watching how the couple were adjusting to their new life, according to .

Schwarzenegger and Shriver have been married for 25 years. Shriver has moved out of their Brentwood home, and the two are now deciding what their next steps will be.

"We are continuing to parent our four children together," the couple added.

Since leaving office, Schwarzenegger has signed on to star in the drama Cry Macho. His reps at CAA also are shopping a package for a new Terminator sequel. In addition, he has partnered with Stan Lee on a Governator comic and animated series, with plans for a movie as well.

The couple's marriage faced challenges in 2003, when Schwarzenegger was running for governor of California, says.