Kate and William: Wedding of the century 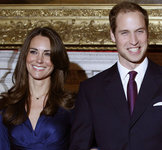 Thousands of well-wishers have lined the mile-and-a-half route to Westminster Abbey in London to celebrate the marriage of Prince William, the second in line to the throne, and Catherine Middleton on Friday.

Foreign dignitaries have flown in from around the world and London has been inundated with tourists who have converged at the scene to await the arrival of the first of 1,900 guests at the abbey from 8:15am. William and his brother Prince Harry, 26, who is his best man, are expected to arrive at 10.15am.

The wedding will be among the first global news events of the social media age: a service full of pomp and ceremony that has thrust the monarchy to centre stage. It will also be the most important - and, courtiers hope, positive - event for the future of the monarchy in nearly 30 years, according to.

What an honor for those who will be able to watch this beautiful couple as they take a courageous giant step into the future.

Just one aspect of the preparations involves clothing and dressing the Royal family, visiting house guests,  the Royal bridal party, uniforms, and more.

The palace will be abuzz with butlers and valets, dressers, ladies in waiting, making certain that every little detail is perfect - believe me everything has to be impeccable. Shoes must be well heeled and polished, suits steamed and pressed, creases sharp.

When laying out clothing for the gentlemen, by staff, it must be done in a strictly regimented order, with socks and underwear first, shirts, vests, jackets in that order and accessories arranged, so they don't get mussed or creased.  A missing button, creased tie or a wrinkled shirt are grounds for dismissal, according to a Buckingham Palace butler, reports.