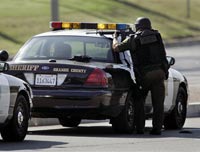 A 30-year-old Santa Cruz woman was found dead in a studio apartment on East Cliff Drive Tuesday night and police arrested a 63-year-old man after authorities discovered that he had been living with the body for at least a week.

About 7:10 p.m. Tuesday, a neighbor on East Cliff Drive in Santa Cruz reported a strong odor coming from a studio apartment, Deputy Chief Steve Clark said. Police went in the apartment and found the corpse of a 30-year-old woman on a bed with blankets over her, Clark said.

The body appeared to have been decomposing for at least a week and the Coroner's Office inspected and retrieved the body Tuesday night, Clark said, according to .

Police said that due to the state of decomposition, it was clear that the body had been in the apartment for several days.

Detectives worked throughout the night to process the scene for evidence but at this time it is unknown how the woman died or why she was in Clauer's apartment.

Clauer was taken in to custody for questioning and was put in jail on a parole hold, reports.