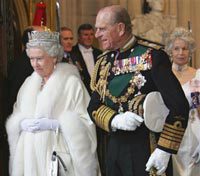 Queen Elizabeth II and Kate Middleton's parents met for the first time on Wednesday, just days before the royal wedding.

The monarch, who turns 85 tomorrow, and her husband, Prince Philip, 89, had lunch with their grandson's future in-laws, Michael and Carole Middleton, at Windsor Castle, Buckingham Palace confirmed, reports.

"The Queen and the Duke of Edinburgh hosted Mr and Mrs Michael Middleton at a private lunch at Windsor Castle today," said a spokeswoman for Buckingham Palace on Wednesday.

Sources described the atmosphere at the lunch, which took place nine days before the wedding of William and Kate on April 29, as "warm".

Michael Middleton, 61, and his 56-year-old wife do not live far from Windsor Castle, in the county of Berkshire, where they have a mail-order business selling party accessories, according to .