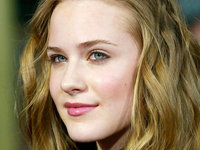 Evan Rachel Wood, "True Blood" star is simply a romantic at heart -- especially when she is out on the town with another woman.

Wood, who plays the Vampire Queen of Louisiana in the HBO series, told the men's magazine that she plays the role of gentleman when out on dates with women.

"Yeah, I'm more kind of like the guy when it comes to girls. I'm the dominant one," Wood said in the interview for Esquire's May issue. "I'm opening the doors, I'm buying dinner. Yeah, I'm romantic", according to .

The 23-year-old former fiance of rocker Marilyn Manson explains what first attracted her to his unique ways.

While bisexuality itself is nothing new, the willingness of those in the public eye to talk freely seems to be a growing trend. Prior to Evan Rachel Wood's bisexuality confession, her True Blood co-star Anna Paquin (now married to Stephen Moyer) shocked fans by coming out in 2010 as part of a PSA for the Give A Damn campaign.