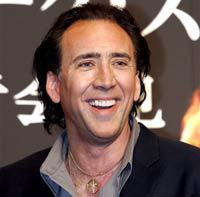 Academy Award-winning actor Nicolas Cage, jailed in New Orleans over an alleged outburst against his wife, police and a few parked cars, is free today after reportedly being bailed out by reality TV star Duane "Dog" Chapman.

According to the New Orleans Police Department, Cage, 47, was "heavily intoxicated and arguing with his wife Alice Kim, 27, in front of a home at 11:30 p.m. Saturday on Dumaine Street in the city's French Quarter, insisting that the house they were in front of was their rental property.

The actor then allegedly began to strike cars in the immediate vicinity and attempted to jump into a taxi, police said. At this point a police officer "immediately observed that Cage was heavily intoxicated and ordered him out of the cab, which prompted Cage to start yelling," according to police, according to .

Cage had previously been married to the actress Patricia Arquette and Lisa Marie Presley, daughter of the legendary singer. Cage and Presley filed for divorce in 2002 after only 108 days of marriage.

The quirky actor, known for his halting delivery and unusual choice of roles, has commanded more than $20 million a movie, yet has teetered near bankruptcy for years, reports.

Duane 'Dog' Chapman posted the actor's $11,000 bail, saying: "I am a truly dedicated fan of Mr. Cage and will not be granting any interviews about my client as I wish to respect his privacy.

"I performed my duties as a bail bondsman and not in connection with our show. This is what I do for a living. There are two sides of my job: I release my clients after they have been arrested; and pick them up if they don't show up in court. I do not believe the latter will be the case for Mr. Cage."

Cage is expected to appear in court on 31 May, informs.