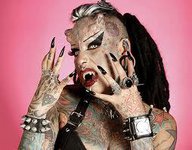 A 'vampire mother' has had titanium 'horns' implanted, to complement the tattoos that cover almost 100 per cent of her body. Maria Hose Cristerna, a mum of four from Mexico, showed off her unusual looks at a tattoo exhibition in Monterrey in California recently.

She had her body transformed as a reaction to enduring years of abuse at home. The striking look is completed by specially shaped vampire 'fang' teeth, fake eye colours and massive earrings - but she's not finished yet! The 35-year-old claims that she wants even more horns implanted, informs.

Moreover, if that wasn't enough, the vampire woman plans to have horn implants put into the back of her head.

Maria had the following to say about her transformation and her work: "Tattooing is my way of being immortal, of really being a vampire and not dying - leaving my work on other people's skin", reports.