Naked man falls on woman from ceiling of her apartment 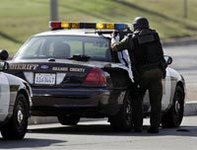 A Mississippi woman got a shock Tuesday when a naked man came tumbling through her ceiling. The man grabbed a coat off a hook and ran out the door.

Police say the man was a wanted fugitive. When police began to search the building in which he was hiding, he allegedly hid in the crawl space above his apartment and started crawling, according to Brantford Expositor.

Police say 33-year-old Patrick Williams, who was wanted on drug charges, was hiding out next door when police came knocking at around 8:30 Tuesday morning. Using the attic as an escape route, Williams broke through a fire wall before tumbling through Mrs Townsend's ceiling, Daily Mail says.

According to Kaliegh Townsend, the man was staying in this apartment right behind me. The man crawled into the attic, busted through the fire wall, and fell into their apartment.

He was convicted in 2007 for possession of cocaine, and, in 2010, a warrant was issued for his arrest because of failure to report to his probation officer. Lamar county officials say they have since captured Williams.

Kaliegh says, "My apartment complex says that they'll probably have to cut a bigger hole than what's there now and to repair it."