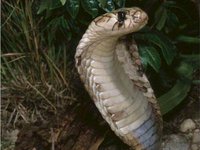 On Sunday it was discovered that an adolescent Egyptian cobra has escaped from its enclosure. The 20-inch-long snake weighs less than 3 ounces. Its venom, which affects the nervous system, can cause death due to respiratory failure.

Zoo officials said they are confident the snake is still within the Reptile House. Staffers are conducting daily sweeps of the premises, CBS News reports.

But Glenn Johnson, world-renowned rattlesnake handler and chairman of the Department of Biology at SUNY Potsdam, said there are better ways to catch a cobra.

"Traps almost never work," he said. "I wouldn't want to be looking for a cobra. Rattlesnakes are pussycats compared to them."

Johnson said workers are probably scouring areas in the Reptile House that create "warm spots," such as beneath refrigerators or inside heating ducts.

"Nothing that they're doing is wrong. I know the zoo is handling the situation properly. Their biggest problem right now is embarrassment . . . and finding that snake."

According to most recent information from San Jose Mercury News, poisonous cobra went missing from the Bronx Zoo, a snake turned up inside a men's bathroom at a Redwood City restaurant Tuesday evening.

A customer found the reptile inside a bathroom at the Fresh Choice on El Camino Real, according to an employee who declined to be identified.

Animal services captured the snake and no one was hurt, the employee said. The restaurant remained open throughout the incident. The employee declined to provide further details.