Clooney, Ronaldo may testify for Berlusconi in sex trial 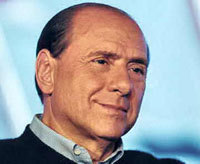 The ‘Ocean's Eleven' actor and Real Madrid striker were named on a list of 78 possible witnesses, including Clooney's Italian girlfriend Elisabetta Canalis as well as several other prominent TV personalities.

"Clooney has been included in the list of the defense witnesses," Piersilvio Cipolotti, one of Berlusconi's attorneys, said by phone today. "He was cited in court documents as a guest of Berlusconi at one of the dinners the premier organized and we want to ask him to confirm this." The witness list must be approved by judges.

Berlusconi on Feb. 15 was ordered to stand trial on charges of abuse of power and paying a minor for sex, fueling calls for his resignation amid a deepening clash with Italy's judiciary.

The trial, which starts in Milan on April 6, will examine his ties to Karima El Mahroug, a Moroccan dancer nicknamed Ruby Heart Stealer who attended at least one party at his mansion near Milan in February 2010 when she was 17, Bloomberg says.