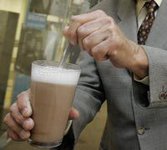 An American who drugged her investment banker-husband with a milkshake and bludgeoned him to death more than seven years ago was convicted of murder Friday at her second trial in a case that grabbed world attention with lurid details on the breakdown of a wealthy expatriate marriage in Hong Kong.

The unanimous verdict and automatic life sentence match the outcome of the first trial against Nancy Kissel, whose lawyers argued she was a battered, clinically depressed wife who acted under diminished responsibility when her husband provoked her attack.

46-year-old Kissel, in her mid-40s, had been convicted of murder. But in the retrial, she had pleaded guilty to the lesser charge of manslaughter, with the defense arguing that she suffers from depression and had been provoked into the crime after years of sexual and physical abuse by her husband.

After the verdict from the jury of seven women and two men was read out, Kissel, looking pale and thin, rocked backwards and forwards slowly as members of her family broke down in tears and held one another.

Justice Andrew Macrae described the retrial as a "difficult and very serious one" while saying that his "hands were tied" in upholding Kissel's life sentence in accordance with Hong Kong punishment for murder, despite mitigating arguments put forward by Kissel's lawyers.

"I don't wish to say anything to add to your anguish," Macrae said simply to Kissel, who struggled to stay on her feet as prison wardens led her from the courtroom, Reuters says.

Kissel's lawyer Edward Fitzgerald asked Macrae to consider her emotional disturbance and psychological distress and to show compassion in writing to Hong Kong's long-term review board.

"We are carefully considering all the matters with regard to our advice on a possible appeal," another of her lawyers, Colin Cohen said, adding that he thought the trial had been fair, Bloomberg reports.