Bryan Adams to unveil his star on Hollywood's Walk of Fame 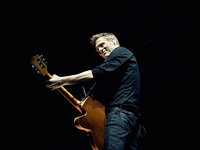 Canadian rocker Bryan Adams head to Hollywood to unveil his star on the Walk of Fame. The 51 year old musician and photographer stepped up to receive the accolade for successes including the songs "Summer of ‘69″, "Cut Like A Knife", "Run To You" and the Robin Hood movie hit, "(Everything I Do) I Do it For You".

He was said to find seeing his own star as humbling recalling visiting the boulevard as a 16 year-old, according to Splash News.

Bryan Adams, the popular musician and soon-to-be father, hopes that the rock community responds to the crisis in Japan the best way it knows how: with a charity concert. Having participated in the legendary Live Aid show, Adams is no stranger to these types of events, and according to Show Biz Spy, he thinks that another one ought to be organized to raise money for the victims of the devastating tsunami and earthquake.

Adams has said, "I'm wondering when someone is going to put something together for Japan. It would be great if the rock community got together for Japan because Japan has given so much to all the rockers over the years. Everybody has spent time there," BeatCrave.com reports.