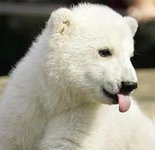 Knut, the polar bear who charmed millions as an adorable cub when a Berlin zookeeper hand-raised him after he was rejected by his mother, died Saturday. He was 4 years old.

Knut was reportedly alone in an outdoor enclosure -- he shared the space with three other bears, including his mother Tosca, all of whom were inside at the time -- when he "strolled around the enclosure, went into the water, had a short spasm and died," Heiner Kloes, a bear keeper at the Berlin Zoo, told the Associated Press.

His death is especially troubling because of his young age. At 4, he was still essentially a teenager in human terms and hadn't even reached his adult weight or sexual maturity yet.

For a seemingly healthy polar bear to die at age 4 is "a little bit surprising," Peter Ewins, an arctic species specialist for the World Wildlife Fund, according to Los Angeles Times.

A post-mortem examination is due to take place today to determine the cause of his death as bears can live for more than 20 years in captivity.

Fan clubs sprung up across the globe after the cute white cub's rejection became headline news.

His supporters were already trading theories about the cause of his demise.

Some speculated he could have been poisoned by food thrown by visitors while others said he became ‘stressed' by three female bears in the enclosure, Metro reports.