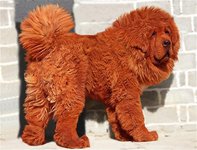 A Red Tibetan Mastiff puppy has become the world's most expensive dog after being sold for almost £1 million. Tibetan Mastiffs are huge and fierce guard dogs that have stood watch over nomad camps and monasteries on the Tibetan plateau for centuries.

They are thought to be one of the world's oldest breeds, and legend has it that both Genghis Khan and Lord Buddha kept them.

More recently, however, they have become highly-prized status symbols for China's new rich. The dogs are thought to be a pure "Chinese" breed and they are rarely found outside Tibet, giving them an exclusivity that other breeds cannot match, according to Telegraph.co.uk

"When I started in this business 10 years ago, I never thought we would see such a price," breeder Lu Liang, owner of the Tibetan Mastiff Garden in Laoshan, told UK newspaper The Daily Telegraph.

"We have spent a lot of money raising this dog, and we have the salaries of plenty of staff to pay."

Tibetan mastiffs are an ancient breed, long revered as skilled guard dogs - and they are huge.

At 81kg and still growing, Big Splash is considered "a perfect specimen," said Mr Liang, who believes the buyer might be able to recoup his investment in just a few years by charging other breeders stud fees of as much as $15,000 each, NEWS.com.au reports.