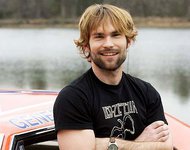 A statement from his publicist reads, "Seann William Scott has voluntarily admitted himself for proactive treatment to address health and personal issues. He appreciates the support of his many fans at this time," according to Toronto Sun.

The 34-year-old actor - best known for his role as Stifler in 'American Pie' - has entered an as yet undisclosed treatment facility to seek assistance for "health and personal issues".

Seann recently admitted his fans struggle to realise he is nothing like his obnoxious, hard-drinking 'American Pie' counterpart.

He said: "I walk down the street and someone's like, 'Hey we'll buy you a shot.' And I'm like, 'No, I'm OK.' They're so crushed, like 'What? But you were in 'American Pie'' I say, 'It's a movie.' "
However, the actor has always been guarded about his private life, and claimed even if he was dating Britney Spears he wouldn't tell anyone about it.

Seann explained: "I really have no desire to date a super hot actress because they're all nuts anyway.

"Anyway, I'm a pretty private guy so if I was going out with Britney Spears you wouldn't find out about it from me," according to Contactmusic.com