Lindsay Lohan pleads not guilty to stealing a £1,544 necklace 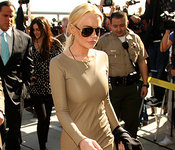 Actress Lindsay Lohan has rejected a plea bargain in her jewellery theft case that would have seen her returned to jail. The Mean Girls star, who arrived late for her court appearance in Los Angeles, has pleaded not guilty to stealing a £1,544 necklace from a store near her home.

Superior Court judge Keith L Schwartz said if Lohan had accepted the plea agreement offered by the prosecution, he would have sent her back to prison for violating her probation, according to Sky News.

Prosecutors in Riverside County are considering charging Lohan for an altercation with a rehab worker in December.

If convicted of stealing the necklace meanwhile, she could be sentenced to up to three years behind bars, Daily Mail reports.