Penelope Cruz gives birth to her first child, a boy 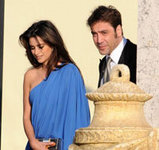 Spanish magazine Hola! claimed Penelope gave birth to a boy at the exclusive Cedars-Sinai hospital in Los Angeles. Members of the couple's family flew in from Spain for the birth: Cruz's mother, brother and sister, plus Bardem's mother, according to Us Magazine.

The birth came the same day Bardem received his third Oscar nomination, for Biutiful. Bardem won an Oscar three years ago for his role in No Country for Old Men and was previously nominated in 2001 for Before Night Falls., Hollywood Reporter says.

The couple, who met on the set of 1992's 'Jamon, Jamon,' co-starred in 2008's 'Vicky Cristina Barcelona.' They began dating in 2007, although they kept their relationship under wraps until after their secret Bahamas wedding in July 2010.

Cruz has referred to Bardem as "a friend and the best actor in the world," according to PopEater.