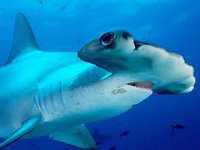 A Serbian man reportedly has become a hero in Egypt -- by accidentally killing a shark with his butt while drunk.

Dragan Stevic was soused to the gills while partying at the Red Sea resort Sharm El Sheikh when he inadvertently felled the beast that had been terrorizing tourists for weeks.

Stevic cannonballed into the water from a high-diving board, according to a Macedonian news agency. Instead of making a splash, he came down right on the shark's head, killing the toothed terror instantly, New York Post reports.

Stevic doesn't remember killing the shark. He was too drunk. He's now in hospital with alcohol poisoning. But the shark slaying was witnessed by Stevic's drinking buddy. After a long night of boozing, Stevic decided he needed a swim. So he walked onto the beach and spotted a diving board.

"Dragan climbed on the jumping board, told me to hold his beer, and simply ran to jump," the drinking buddy says. "Dragan jumped high and plunged down to the sea, but didn't make as much splash as we thought he would."

That's because he landed on a shark, Register informs.

Have a very Merry Christmas everyone!