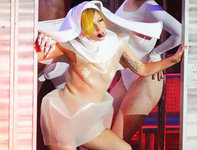 Lady Gaga's famous eccentricity took a less-than-festive turn last night when she tore the head off a stuffed Santa Claus at her O2 show.Halfway through her set, the singer, 24, made it plain that she loathes Christmas.

She seized the Santa doll and told the audience: "I hate the holidays. I'm alone and miserable you f**king stuffed little toy", This is London informs.

Dressed in a perspex high-shouldered tunic dress, GaGa demonstrated that when you forget a vital piece of underwear the end result can be rather painful.

The Alejandro singer must have been very uncomfortable considering her boobs were squashed to an eye-watering flatness, as she performed some rigorous choreography during her show.

Even the star's super-toned stomach looked like it was undergoing some heavy chafe-age in the futuristic outfit, which left little to the imagination, Ok! Magazine says.