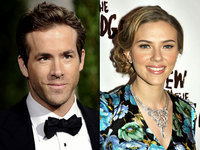 Scarlett Johansson and Ryan Reynolds are breaking up.

"After long and careful consideration on both our parts, we've decided to end our marriage," the two entertainers said Tuesday through their publicist, Meredith O'Sullivan.

"We entered our relationship with love, and it's with love and kindness we leave it. While privacy isn't expected, it's certainly appreciated," they said, The Associated Press reports.

The 26-year-old actress and 34-year-old actor started dating after Reynolds broke off his engagement to singer Alanis Morrissette in 2008. The couple announced their engagement in May 2008 and married in a small ceremony in Tofino, British Columbia in September 2008.

Their separation comes as both of their careers continue to heat up. Reynolds was named People's Sexiest Man Alive in November and his highly-anticipated The Green Lantern will be out in 2011. Johansson most recently hosted Saturday Night Live and starred in Iron Man 2 earlier this year, SheKnows.com reports.