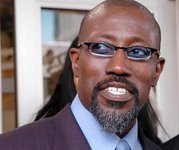 Award-winning actor Wesley Snipes, best known for his roles in the "Blade" trilogy, surrendered shortly before noon today at a federal prison in Pennsylvania where he will serve a three-year sentence for failing to file his taxes.

Snipes, 48, was convicted in April 2008 of three misdemeanor counts of willful failure to file income taxes and has spent the last two years unsuccessfully trying to appeal the ruling.

But the wait is over for Snipes, who was required to hand over his street clothes for a prison uniform as he settles into his new home at the McKean Federal Correctional Institution in Lewis Run, Pa, ABC News reports.

The minimum security prison camp in the north-western town of Lewis Run is worlds away from the harsh prison fortresses depicted in the Snipes films Undisputed and Brooklyn's Finest.

The minimum-security camp doesn't have fences around its perimeter and the 300 non-violent inmates live in barracks that feature two-man rooms.

Snipes was convicted in 2008 on three misdemeanour counts of wilful failure to file income tax returns, The Press Association says.