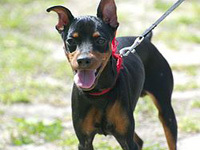 A court of the Novgorod region of Russia sentenced Aleksey Andreyev, a local deputy, to two years probation for publicly killing a Miniature Pinscher and causing bodily damage to its owner, an elderly woman, officials said.

On September 17 2009, Andreyev shot the woman's Miniature Pinscher dead from a sporting gun and then punched the woman in the chest. The incident took place not far from the village of Rakitino.

The deputy said that he was hunting on a legally designated area, but the Pinscher was scaring game away. Andreyev stated that he had repeatedly asked the woman not to walk her dog in the hunting area, Pravda.Ru reports

The incident happened when the official was driving towards the village of Rakitino. On his way there, he saw two elderly women walking with a little dog along the road. Andreyev stopped the car, and asked the women not to walk the dog near the forest claiming that the dog was scaring away the wood grouse.

The woman simply ignored the deputy and continued walking. The man grabbed his sporting gun, stepped out of the car and shot the dog dead. Afterwards, he punched one of the women in the chest knocking her down and drove away.