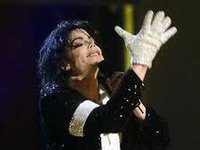 A lone glove worn by Michael Jackson during his 'Bad' tour in the late 1980s has sold for more than £200,000 at auction. Items from the King of Pop's stage wardrobe attracted furious bidding at the celebrity memorabilia auction in Beverly Hills.

Over 100 items from Jackson's life and career including a custom-made costume for his friend and companion Bubbles, the chimp, went under the hammer.