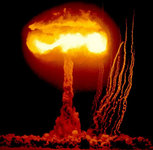 Samuel T. Cohen, the father of the controversial tactical nuclear weapon known as the neutron bomb died Sunday at his home in Brentwood on the west side of Los Angeles. He was 89 and died two weeks after the removal of a cancerous tumor from his stomach, according to his son Paul.

Neutron weapons, which release a burst of neutron radiation rather than explosive energy, have the ability to destroy people and other living things while causing little material damage.

A succession of US presidents rejected the technology, with Jimmy Carter forced to postpone plans to deploy the warheads in 1978 amid protests.

In 1981, then president Ronald Reagan authorised the production of 700 neutron warheads to counter Soviet tanks in Eastern Europe. The weapons were later dismantled, according to Sify.