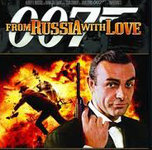 A pistol held by Sean Connery in a publicity shot for the James Bond film From Russia With Love has fetched almost £280,000 at auction - more than 10 times the asking price.

The Walther gun proved hugely popular with bidders at Christie's in London, selling for £277,250, well above the top estimate of £20,000.

It softened the blow for the auction house after a rare Darth Vader costume failed to sell, Sky News informs.

The weapon was a Walther air pistol which Bond actor Sean Connery held in a photo-shoot used for the main image in the poster and advertising campaign for the 1963 movie. It had been priced at between $23,900-$31,875 pounds before the pop culture sale, and the last time it went under the hammer was in 2001 when it sold for $22,471 pounds.

The Darth Vader costume was believed to have been for the production of "The Empire Strikes Back," the second "Star Wars" film to be released, Times and Transcript says.